Epigenetics involves reversible modifications of the DNA (methylation of the base cytidine) and the chromosome-associated proteins (histones). These so-called epigenetic changes can lead to inactivation of the affected chromosome sections. This epigenetic mode of gene regulation usually serves to respond to changing environmental conditions (temperature, light, food). Although epigenetic changes are usually reset after the end of a stressful situation, they can sometimes be passed on to the next generation.

As with RNA interference (RNAi), double-stranded RNA (dsRNA) plays a key role in the establishment of new epigenetic features. In addition, mutations that result in a defective RNAi mechanism have epigenetic anomalies. There is therefore a direct correlation between the RNAi and epigenetic changes. As part of the research focus "RNA-mediated gene regulation", we try to elucidate the interactions between RNAi and epigenetic processes using genetic and biochemical approaches. 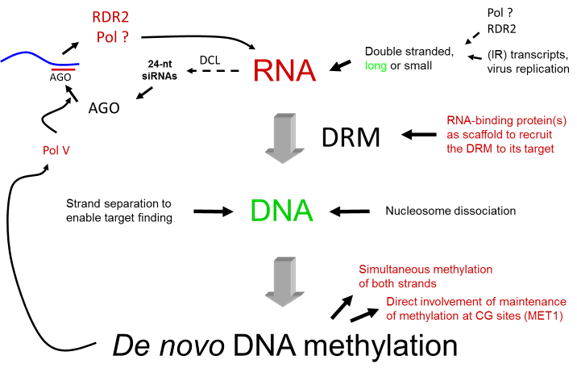 The project is still continued by in-house funding