Crown gall is the most important bacterial disease of vines in the northern and eastern wine-growing regions of Europe. Particularly in years with severe winter frosts, severe disease outbreaks ("tumors") can occur, which can result in the complete die-off of the vines.

The causative agent is the Gram-negative bacterium Agrobacterium vitis. The disease is of great importance for grapevine breeding and grafting, as the transmission by latently infected propagating material is regarded as the most important path of transmission. This could be shown in a vine grafting process carried out by us in the laboratory: A stable red fluorescent protein (RFP)-expressing strain of A. vitis was established using transposon technology and added to the propagating material to be grafted. The visual localization of the pathogen in the tissue by means of fluorescence or confocal microscopy could thus be carried out. Currently, detection in potentially infected propagating material is performed by live isolation of bacterial cells on semi-selective media and subsequent PCR detection using specific primers. 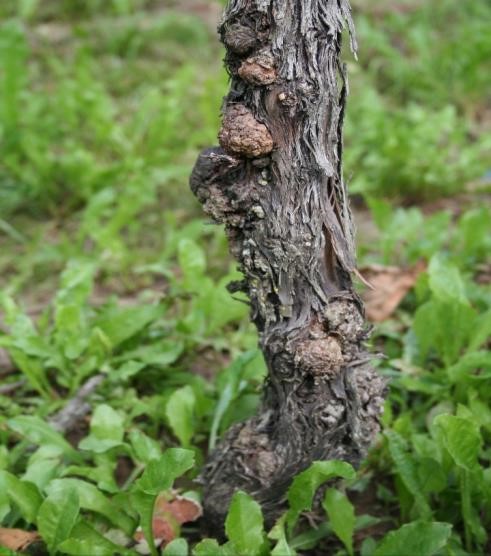 Vine with tumors caused by the infestation with the crown gall bacterium (A. vitis)