RNAi induced by double-stranded RNA (dsRNA) describes mechanisms that can silence genes at the transcriptional, post-transcriptional, and translational levels. In transcriptional gene silencing (TGS), the regulatory elements of genes are turned off by epigenetic changes. The post-transcriptional gene silencing (PTGS) results from the specific degradation of RNA while the termination of translation is due to processes that are still largely unexplained. Because of the variety with which the RNAi can intervene in the gene regulation of all eukaryotes, the elucidation of the RNAi mechanisms is one of the most important work in biology and medicine today (Nobel Prize for Medicine, 2006). Although all RNAi mechanisms share common components, in most cases specific members of various enzyme families are essential for transcriptional, post-transcriptional, and translational gene inactivation. These classes of enzymes mainly include forms of Dicer (DCR) or Dicer-like (DCL) plants, Argonaut (AGO) and RNA-directed RNA polymerase (RDR) proteins. Plants have a complete and one of the most varied assortments of these enzymes. It is therefore understandable that much knowledge about RNAi has been gained through studies of plant systems. In addition, plants accumulate all types of small regulatory RlllNAs, most notably short interfering RNAs (siRNAs), which include microRNAs (miRNAs) and trans-acting short interfering RNAs (tasiRNAs). Another advantage of using plants as a model system is the knowledge of innumerable plant viruses that code for so-called silencing suppressor proteins. These proteins can suppress various processes of RNAi and are therefore used as a tool to elucidate the RNAi in detail.
current Projects

After RNAi-mediated cleavage the RNAs are usually completely degraded. However, in plants occasionally some of the target transcripts are transcribed into so-called secondary dsRNAs by RDRs (Wassenegger and Krczal, 2006). Similar to primary dsRNA, secondary RNAs are processed by DCLs leading to the production of secondary siRNAs. This process propagating in the 5 'and 3' direction from the primary target region is called transitivity or transitive silencing. The mechanistic details of transitivity are largely unknown. In addition to transitivity, so-called systemic silencing is found in plants. Signals traveling over long distances can be produced in cells in which local silencing has been activated. In cells receiving such signals, systemic silencing of homologous transcripts can be induced. Interestingly, for unknown reasons, transcripts of transgenes are generally much more susceptible to transitivity and systemic silencing than endogenous transcripts (Dadami et al., 2013, Dadami et al., 2014).

We are currently investigating whether the introduction of a putative RNAi trigger is sufficient to initiate systemic silencing. Moreover, we are investigating how transitivity and systemic silencing of transgenic versus endogenous target transcripts are initiated. The use of synthetic siRNAs allows for the first time to study the nature of RNAi triggers accurately (Dalakouras et al., 2016).

The project is continued by in-house funding.

The goal of GAMAVIR was to unravel the role of small RNAs (sRNAs) in the fine–tuning of gene expression during virus infection in Rapeseed (Brassica napus). Genes that are targeted by sRNAs during infection may represent useful targets for the breeders. Such genes were to be identified and subsequently mutated to confirm their function during infection in this crop. 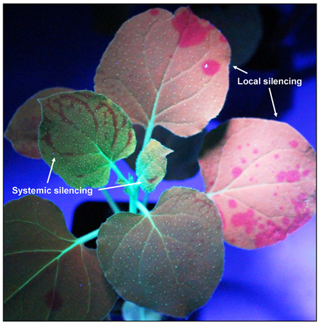