The spotted wing drosophila Drosophila suzukii is an invasive pest from Asia that has been spreading rapidly throughout Europe since 2008. In 2014, it already caused considerable damage in German fruit and vine growing. Since ripe fruits are affected, control is extremely difficult and so far not very effective.

As part of the InvaProtect project, we are investigating the hibernation of D. suzukii in our region, e.g. population dynamics, overwintering places and cold tolerance. The number of overwintered flies and the population build-up in spring are decisive factors for further infestation in cherries and berries. In a Biochance project, we aim to develop an alternative, environmentally friendly method for this control in springtime. It is based on the so-called RNA interference (RNAi) by application of small double-stranded RNAs, which are specific to D. suzukii, and thus have no effect on other (beneficial) insects. The RNA molecules are to be offered as food in an attractive trap. The control is based on a specific "attract & kill" strategy. 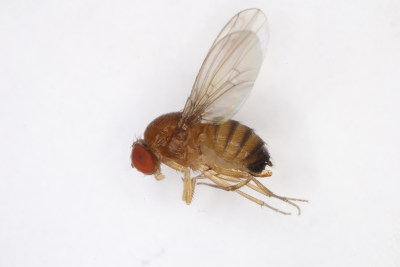